How attention deficit hyperactivity disorder is treated with Atomoxetine

What is an attention deficit hyperactivity disorder?

It is characterized by the triad of signs: impaired attention, hyperactivity, and impulsivity.

Attention disorder is manifested in the fact that the child is unable to concentrate on the details, is constantly distracted and makes mistakes in school tasks (which are more likely to be negligent than caused by the lack of logic and thinking abilities). Preschooler hardly keeps attention while playing. It often seems that he/she doesn't listen to the speech addressed to him/her.

Sometimes it may seem that the child doesn't understand the instructions and tasks, because he/she is not able to complete them, but in fact, the problem is not the weakness of thinking, but the inability to concentrate for a long time.

A child may desperately resist performing tasks that require prolonged mental stress, be it a math task or room cleaning. However, it's not a matter of negativity or protest behavior: it is actually very difficult for him/her and therefore requires willpower that doesn't fit his/her age.

By the way: not only children suffer from ADHD. However, adults are usually able to overcome difficulties with concentration, so others may not notice their problems.

Inattention leads to the fact that the child often loses things (toys, school supplies, mittens or removable shoes) or forgets the diary, notebooks/books at home.

What are the manifestations of ADHD?

Hyperactivity is manifested in the child's inability to engage in quiet or calm activities. Sitting in the classroom or at home when doing homework, a child constantly turns and rises even in situations where he/she is supposed to stay in place and shows aimless physical activity. He/she often tries to climb somewhere and puts his life at risk, failing to assess the consequences of his actions properly.

Some of the hyperactive children are distinguished by the fact that they never remain silent; their flood of words is very difficult to stop, which becomes especially noticeable in the school, where the classroom system implies the student speaking only at the teacher's request.

The third criterion of the syndrome is impulsivity. The child often answers the question without thinking or hearing it out. It's hard for him to stand in line. He/she often interferes in conversations or games and talks to the strangers. He performs risky actions under the influence of a sudden impulse, failing to think about the dangerous consequences. Such a child is more likely to be injured and often spoils his/her or someone else's property.

It should be noted that the syndrome can occur with predominant attention disorders but without hyperactivity and impulsivity, and vice versa. Hyperactivity and impulsivity can be the leading symptoms of mild attention disorder. But in one form or another, the disease always creates difficulties in adapting to school life, in terms of both academic performance and relationships with classmates.

Making a diagnosis - what to pay attention

A diagnosis of ADHD can be made starting at a late preschool or primary school age since this requires an assessment of the child's behavior in at least two conditions of the situation (for example, at home, and at school), as well as marked impairments in learning and socialization.

Given that attention deficit disorder with hyperactivity is a recognized diagnosis, specialists, parents, and teachers in many countries note the problem of the subjectivity of diagnosis, and therefore, overdiagnosis, or vice versa, failure to diagnose ADHD. Both are dangerous: medical treatment of a healthy but somewhat restless child will only bring harm, but a child with a real disorder who doesn't receive adequate help (not necessarily pharmacological) suffers.

Correction of symptoms of attention deficit disorder in children can be done with the drugs that affect certain conditions. For example, hyperactive children with sleep disorders are prescribed light tranquilizers.

Atomoxetine hydrochloride is an effective drug specifically developed for the treatment of ADHD in Australia. 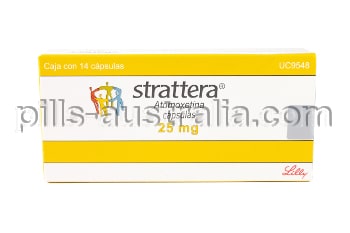 Strattera capsules are designed to treat attention deficit disorder with hyperactivity. Usually, the drug is prescribed to the children over 6 years and adults. Its main active ingredient is Atomoxetine. This substance affects the production of serotonin and dopamine, as a result of which the symptoms of ADHD smooth out. If the doctor offers you to buy Strattera for your child, don't worry because Atomoxetine is not a psychostimulant or amphetamine. Strattera without prescription is also recommended for the adults with a similar diagnosis.

The main mechanism of Atomoxetine action is associated with an inhibition of norepinephrine reuptake, which is accompanied by increased synaptic transmission involving norepinephrine in different brain structures. In addition, experimental studies showed an increase in the content of norepinephrine and dopamine in the prefrontal cortex under the influence of Atomoxetine, since, in this area, dopamine binds to the same transport protein as norepinephrine. Since the prefrontal cortex plays a leading role in ensuring the control functions of the brain, as well as attention and memory, an increase in the concentration of norepinephrine and dopamine in this area under the action of cheap Strattera leads to a weakening of ADHD symptoms. The treatment with Strattera costs much money, because the therapy takes much time.

Strattera is contraindicated in such cases:

How Atomoxetine effects the disease

Strattera pills have a beneficial effect on the behavioral characteristics of children and adolescents with ADHD; its positive effect usually appears already at the beginning of treatment, but the effect continues to increase during the month of continuous drug intake. In most patients with ADHD, clinical efficacy is achieved when taking the drug in the dose range of 1.0-1.5 mg/kg of body weight per day (take a single dose in the morning). The advantage of Atomoxetine is its effectiveness in cases when ADHD is combined with destructive behavior, anxiety disorders, tics, and enuresis. Strattera price is another benefit. Strattera online reviews say about many side effects, so the treatment must be conducted strictly under the supervision of a doctor.

Strattera / Atomoxetine is the first medication for the treatment of ADHD approved by the Food and Drug Administration (FDA), which doesn't increase the release of monoamines, stimulate physical activity or cause withdrawal syndrome/addiction. More than 3.7 million patients worldwide have used generic Strattera since it has obtained permission for marketing in the United States in 2002.