Some 30–40 years ago, the diagnosis of gastric ulcer knocked the soil out of the legs. Life-long diet and endless treatment of ulcers, which, despite all the tricks of the doctors, felt great in the stomach and was not going to heal. Today the solution is found. The triumphant discovery, which has become the key to the solution of a peptic ulcer, still gives scientists confidence. And most importantly, it offers hope to thousands of people who are waiting for new drugs for cancer, AIDS, and many other serious diseases.

Peptic ulcer in the world of big numbers

According to various sources, from 10 to 15% of the world's population at some time during their life encounters this disease. Both in Australia and around the world, peptic ulcer disease is considered the most common gastrointestinal pathology, and with age, the probability of getting sick becomes higher. This is mainly due to the fact that the risk of "catching up" the culprit of all troubles - a small, but very stable in the acidic environment Helicobacter pylori - only grows over the years. And if in 20 years the probability of infection is 20%, then with each subsequent decade it increases by precisely 10%. It turns out that by the beginning of the sixth dozen half of the world's inhabitants are already intimately familiar with H. pylori.

Every year more and more new cases are diagnosed. Doctors associate this disappointing trend with the widespread use of nonsteroidal anti-inflammatory drugs, significantly increasing the vulnerability of the stomach wall. However, the achievements of modern medicine allow us to give a very favorable prognosis for peptic ulcer disease. But at the end of the last century, it was not so clear.

For many years, the origin of peptic ulcer was interpreted incorrectly. False theories became a solid basis for erroneous treatment that did not bring the expected results. At the beginning of the 20th century, doctors were inclined to believe that a person with a stomach ulcer pays for nervous shocks. The basis of the therapy was a diet that excluded everything fried, spicy and spicy, and, of course, sedatives. It is not surprising that, against the background of such treatment, recovery was a very dubious outcome.

The story of one of the greatest discoveries of the 20th century began in 1979, when Barry Marshall, an ordinary doctor, was promoted to a job at the largest clinic in Western Australia, the Perth Royal Hospital. During one of the in-house trainings organized by the clinic management, Marshall met a talented pathologist Robin Warren. He just studied the etiology of gastritis and managed to captivate a new friend. Already in 1981, a duet of Marshall and Warren discovered a spiral bacterium in the mucous membrane of gastritis patients. It took a year for researchers to develop a hypothesis linking the "newborn" Helicobacter pylori with peptic ulcer and stomach cancer Helicobacter pylori are a widespread pathogen of the stomach that causes such pathologies as gastritis, peptic ulcer, adenocarcinoma, and poorly differentiated lymphoma of the stomach. Infection may be asymptomatic or lead to dyspepsia of varying severity. The diagnosis is made based on a urea breath test, stool analysis for antigens, and analysis of samples obtained by endoscopic biopsy. The treatment is carried out with a proton pump inhibitor along with two antibiotics.

What are Helicobacter pylori

H. pylori are a gram-negative microorganism of spiral shape, well adapted to life in an acidic environment. In developing countries, this microbe often causes chronic infection, infection usually occurs in childhood. In the United States, infection in children is less common and increases with age: 50% are infected by age 60. Infection is more common in black Americans, as well as Americans of Hispanic or Asian origin.

The microorganism was cultivated from feces, saliva, contents of the periodontal pocket, which suggests an oral or alimentary (fecal-oral) route of transmission. Infection tends to "clutch" with family members and persons permanently residing in social care institutions. It is assumed that nurses and gastroenterologists constitute a high-risk group since the bacterium can be transmitted through endoscopes in case of incorrect disinfection. 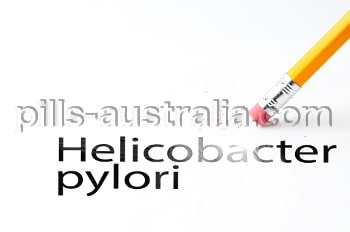 It is not recommended to buy Nexium with Esomeprazole intolerance, joint intake with atazanavir, the period of breastfeeding, age under 12 years, severe renal dysfunction, hereditary intolerance to fructose, sucrose-isomaltase deficiency, and glucose-galactose malabsorption.

When using the cheap Nexium in the treatment of pregnant women will require a careful balance of harm and benefits from its use.

Prior to the initiation of the therapeutic use and determine Nexium cost, it is recommended to exclude the presence of malignant neoplasms in the patient, since the use of the drug may smear the clinical picture of the disease and delay the correct diagnosis.

Nexium pills are intended for oral administration. The tablet is recommended to be swallowed whole without additional grinding.

In the prevention of relapses in patients with cured esophagitis, the drug is prescribed at 20 mg once a day.

Peptic ulcer is one of the most common pathologies of the gastrointestinal tract, and the choice of adequate treatment regimens is among the most pressing problems of modern gastroenterology. A number of studies have shown the promising use of omeprazole mono- isomer- esomeprazole in the treatment of ulcer. Nexium online is known to suppress basal and stimulated secretion of hydrochloric acid, regardless of the nature of the stimulant. The peculiarities of the chemical structure provide the esomeprazole with a unique predictable metabolism, which allows it to overcome the main drawback of this group of drugs - significant metabolic variability and high Nexium price.